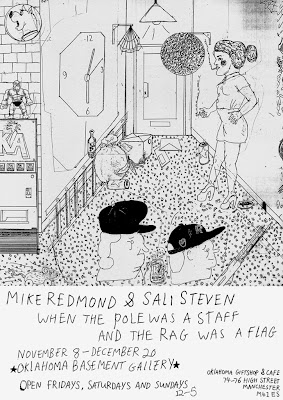 Here's the details...
When the pole was a staff and the rag was a flag
By Mike Redmond & Sali Steven

"The show is split into two mainly equal parts; One about my efforts in wasting time and my long lost brother. The other section is about the three robber brothers of the future and their affiliation with each other and their historical heroes focusing on the unabiding attitute to future laws and sad fates. Balling in and out of reality and made up ideas I have tried to free myself from the construct of time, however like most problems I have shot back into the past, the present and the future as the show title explains. Following my miserable excuses of where me and my brother have been and will go. Motion Past."

The show opens on November the 8th, and is open every Friday, Saturday and Sunday, from 12–5pm, until December 20th 2013, at the Oklahoma Basement Gallery, Oklahoma Giftshop & Cafe, 74 - 76 High Street, Manchester, M41 ES